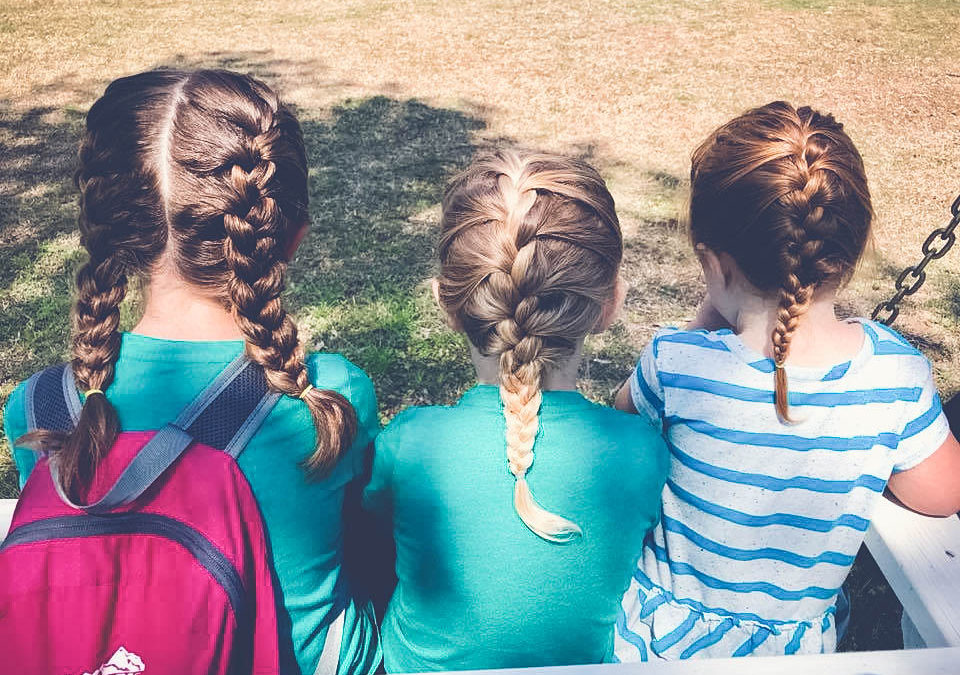 Today, I’m going to let you in on a little secret. There may not be as many of “us”, as there are of “them (girl moms who can French braid)”, but it is pretty neck and neck.

I’m guessing that many of you are like me. When all the other little girls were making those little origami fortune teller things and learning to braid each other’s hair in elementary school, you were putting glue on your hand and letting it dry so you could peel it off.

Or perhaps you were battered and bruised in the nurses office, after attempting to make your body fly parallel to the ground while holding onto the merry-go-round as it revolved at super sonic speed.

Regardless, you somehow arrived at adulthood having never acquired the knowledge needed to execute a proper French Braid. Which honestly, wasn’t a big deal because you never braid your own hair anyways, and the days of sitting around playing with your girlfriends hair have long since passed.

But then it happens, you produce female offspring. And while the cute little fountains and pigtails work for awhile, eventually a Disney princess comes along, and you will be asked to replicate said Princess’s hair. 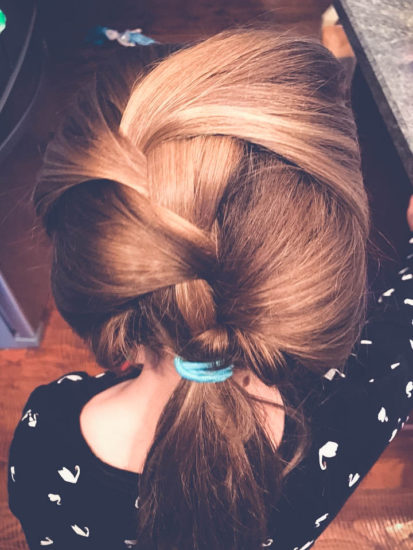 For me it was two-fold. The first being, when the Princess Elsa/Ana braid extravaganza hit?. I tried to fool my girls with the ole “ponytail + standard braid”, but they both have a keen eye and knew something was amiss.

I am sure many will say I am causing irreparable psychological damage, but in this house, I throw around a lot of “suck it up, buttercup”, and “you get what you get and you don’t throw a fit.” So I was able to somewhat skirt the French Braid demand.

But, what finally pushed me over the edge and forced me to learn to French Braid, were the daily rats nests my girls were waking up with. I’m not talking about a few tangles that need a little more attention. I’m referring to the beginning of dread locks. Matted hair that sometimes had to be cut out because nothing, NOTHING, could be done to release the angry wool blanket of hair. I would have them sleep in ponytails and they still woke up with tumbleweed hair. Not to mention ponytails are very uncomfortable.

I have 3 girls, all with 3 very different amounts and types of hair. One lovely challenge that is present across all 3 heads of hair, is a tumbling fusion of stick straight strands combined with an uncooperative bevy of curls.

I hope someday they thank me for passing down a thick head of hair, and at some point they are able to manage it on their own. And maybe they will even thank me for their combination curly-straight hair. They get it from their mama, and there was a steep learning curve for me. Some days I still struggle, when it has a life of its own. 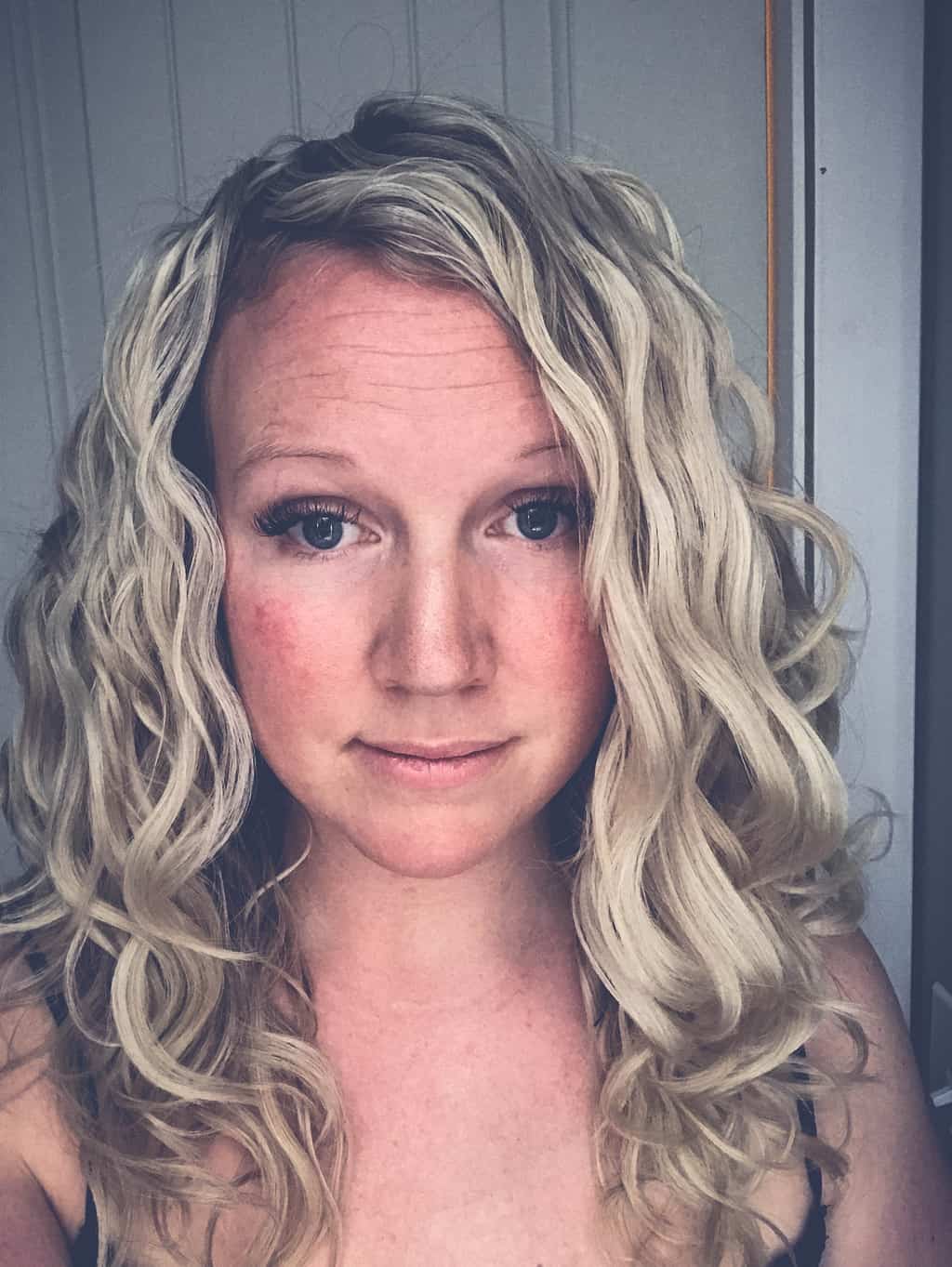 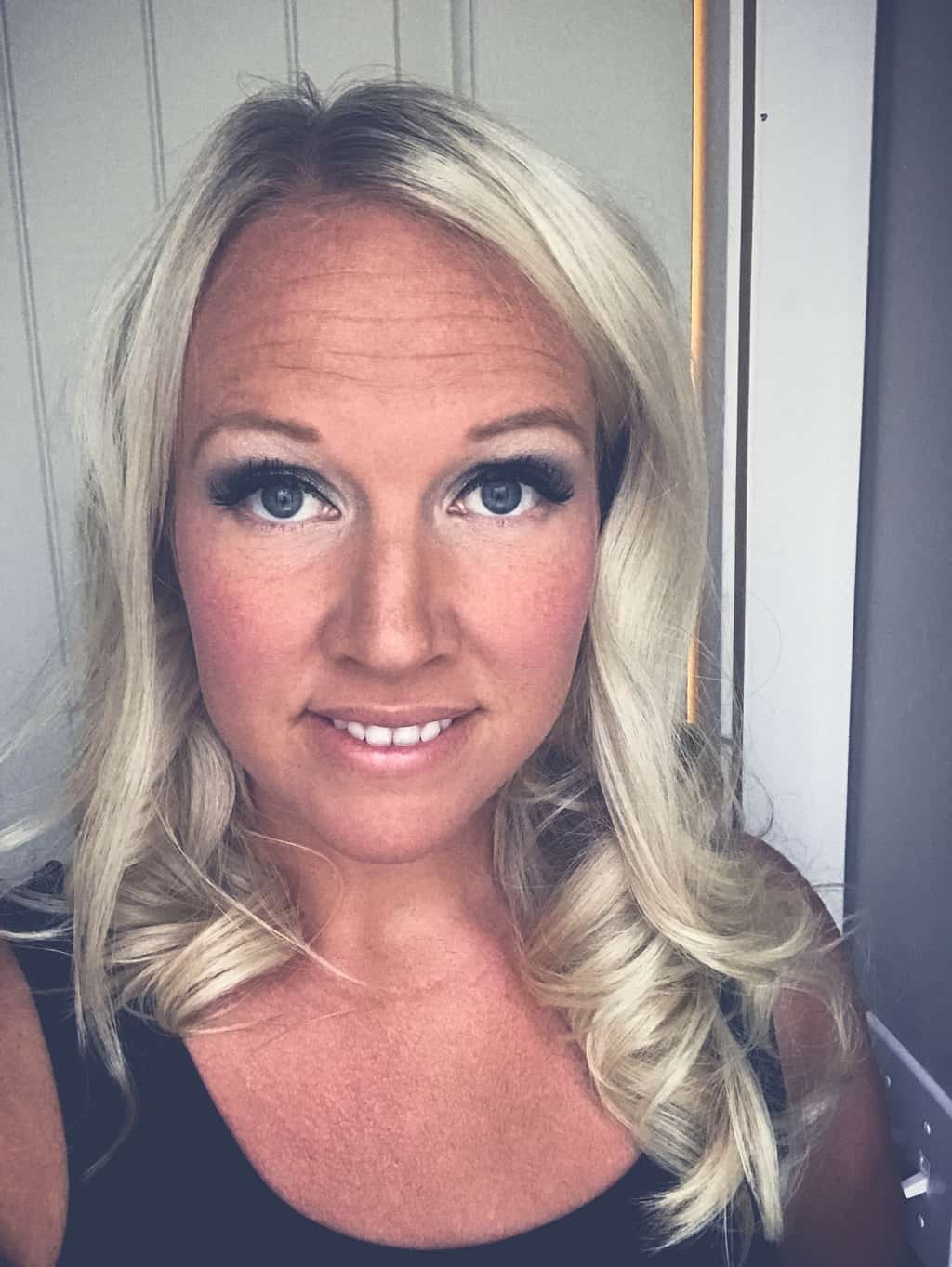 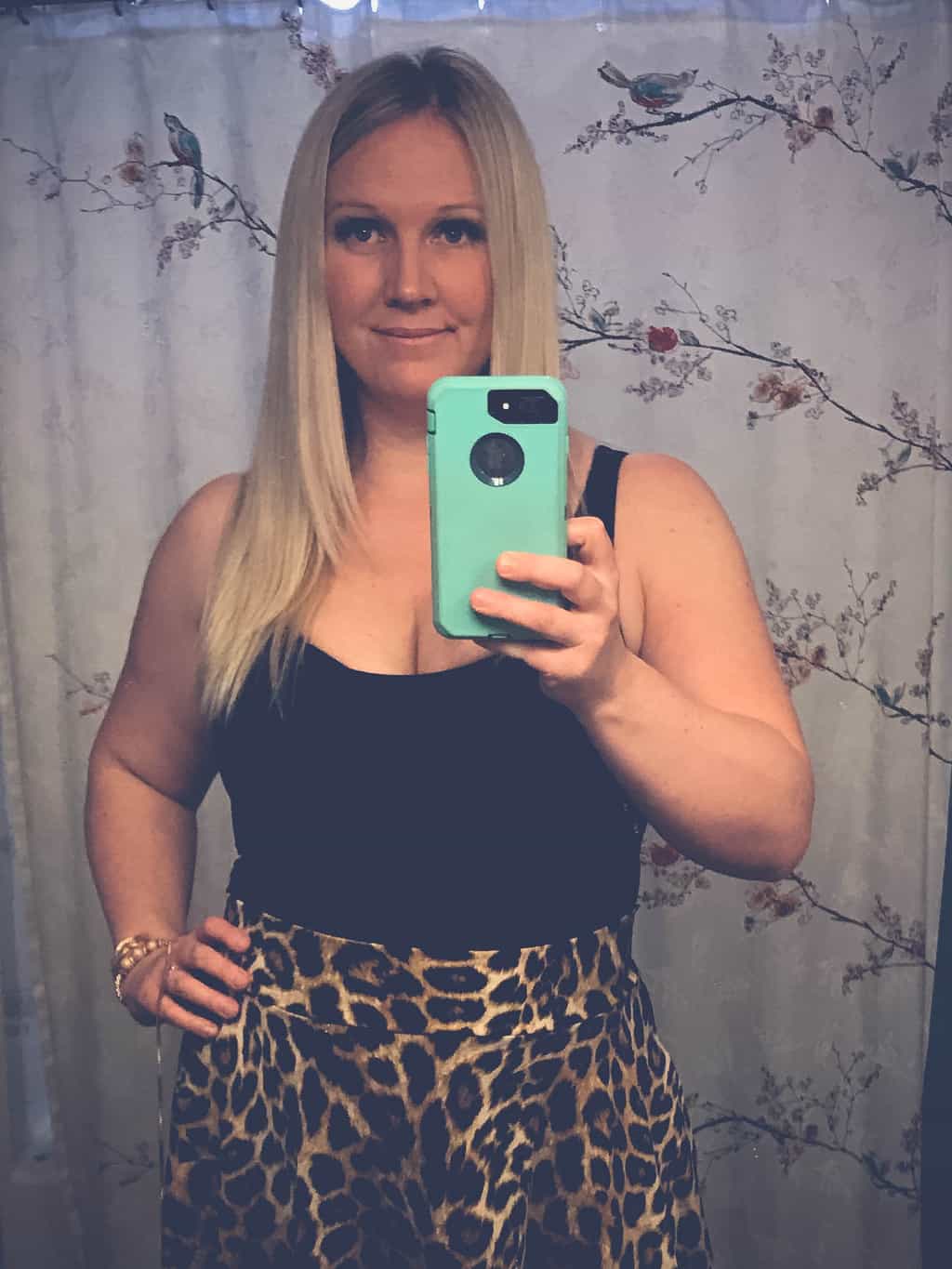 Pic 1. Natural curl with a lot of product
Pic 2. Blowdried then curled with wand
Pic 3. Straightened with Chi

My oldest has more hair than I have ever seen on a human head. My husband and I both have thick hair, so I expected my children to have something similar, but this child’s hair is truly something to behold.

Then there is my little free spirited middle child. She was bald the first 6 months of her life, so I knew she was going to be my little blonde. When she was a toddler she had a head full of messy bouncy blonde curls. And it was absolutely adorable! 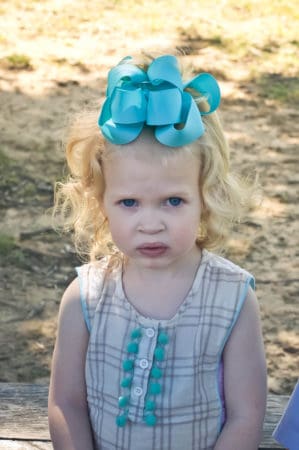 (I’m literally tearing up staring at this pic of my precious girl. Those perfect little blonde curls around her sweet baby face. This seems like yesterday.)

Somewhere around 4, the curls began to fall out in random patterns and turned into straw. So like, the top left quadrant straight, behind right ear to crown spiral curls. Then some of my favorite areas, where the locks are curly next to the scalp, then straight the rest of the length of the hair. 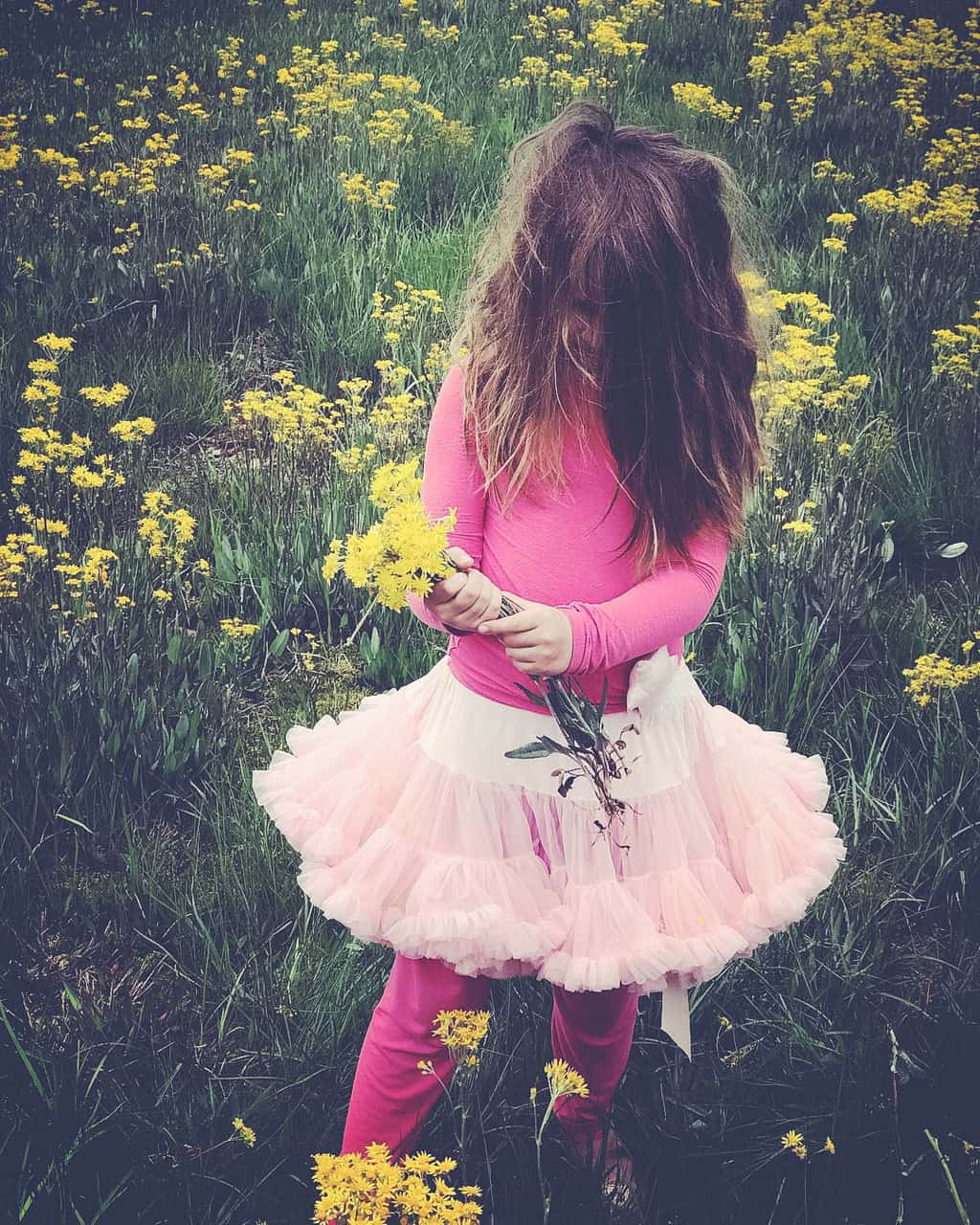 (My free-spirit is the blonde, red head is her sweet cousin)

And then my sweet baby. Well, she is going on 3 years old, but she is my last, so let me have this?. Of the 3, her hair is the most “normal.” Straight on top flowing into precious soft curls. Of course, she is a year away from when the other two girls’ hair went Ka-rĀ-Zy, but at least for now this is what I’m dealing with. 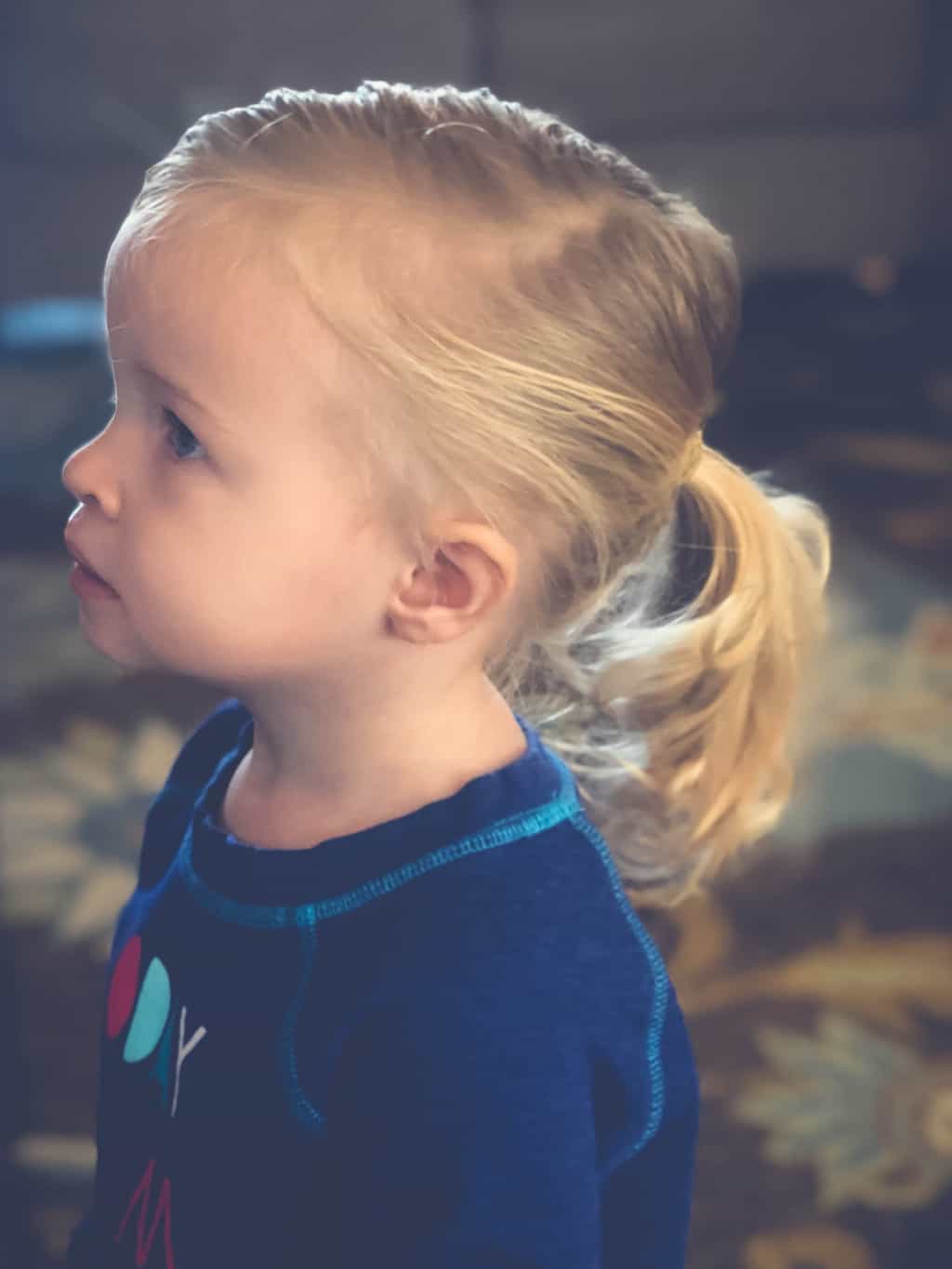 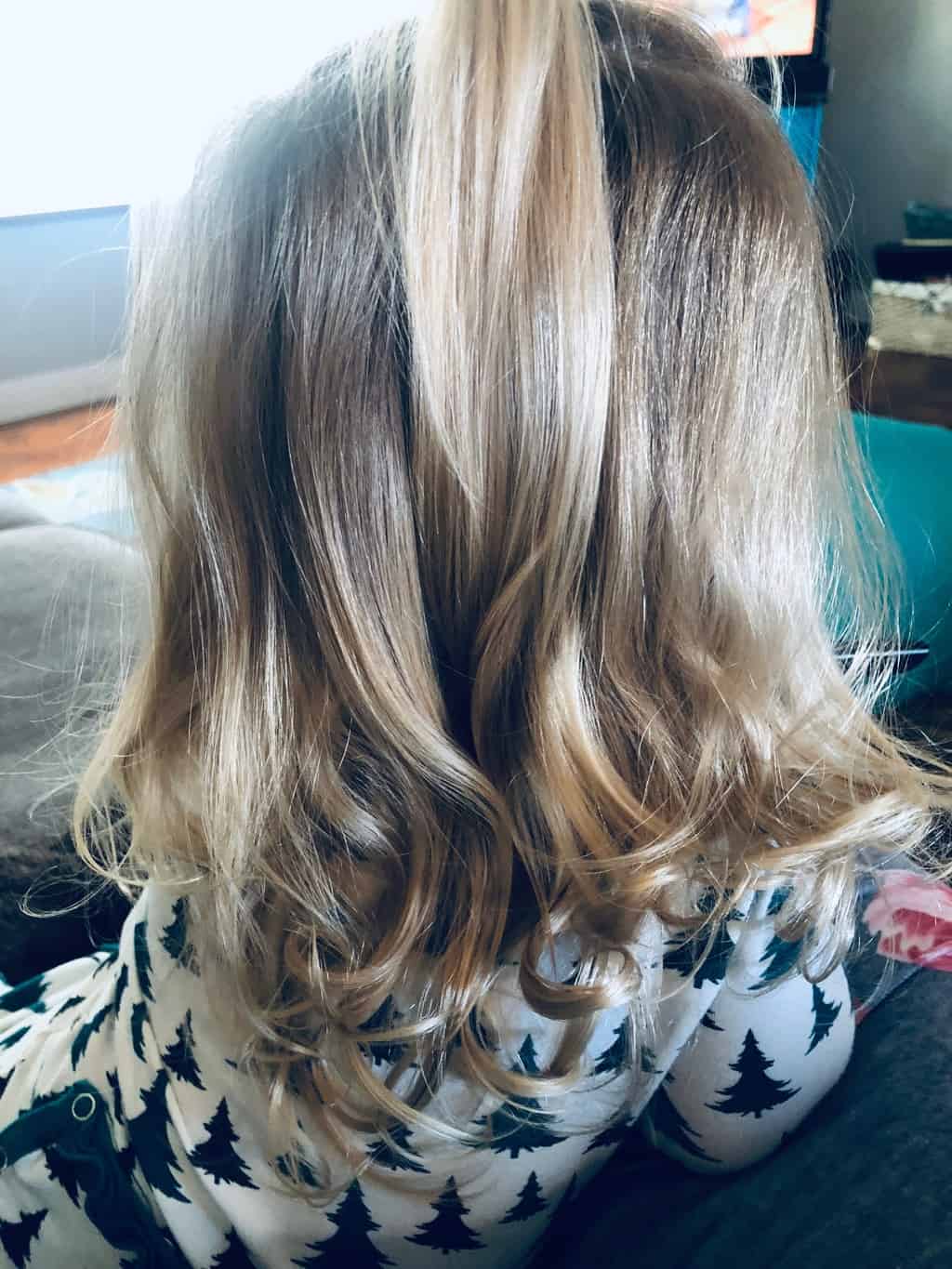 You get the idea, some really special hair going on in our house. And the best part is it’s ability to tie itself in millions of little knots, while simultaneously teasing itself, all while my children slumber. 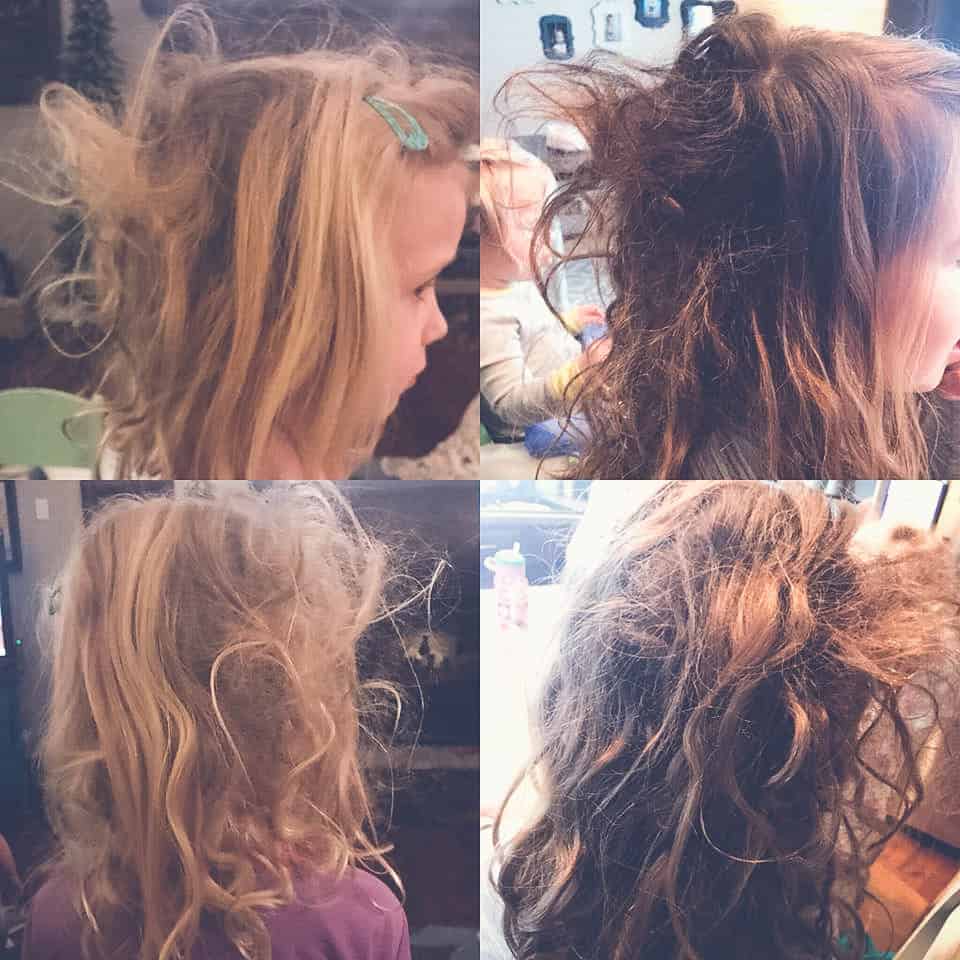 I have tried cutting their hair short (see pic below), leave-in conditioner, coconut oil, peanut butter, and every other “helpful” suggestion. Self-knotting/Self-teasing hair, laughs at these suggestions. If anything, these attempts have served only to anger the beast. 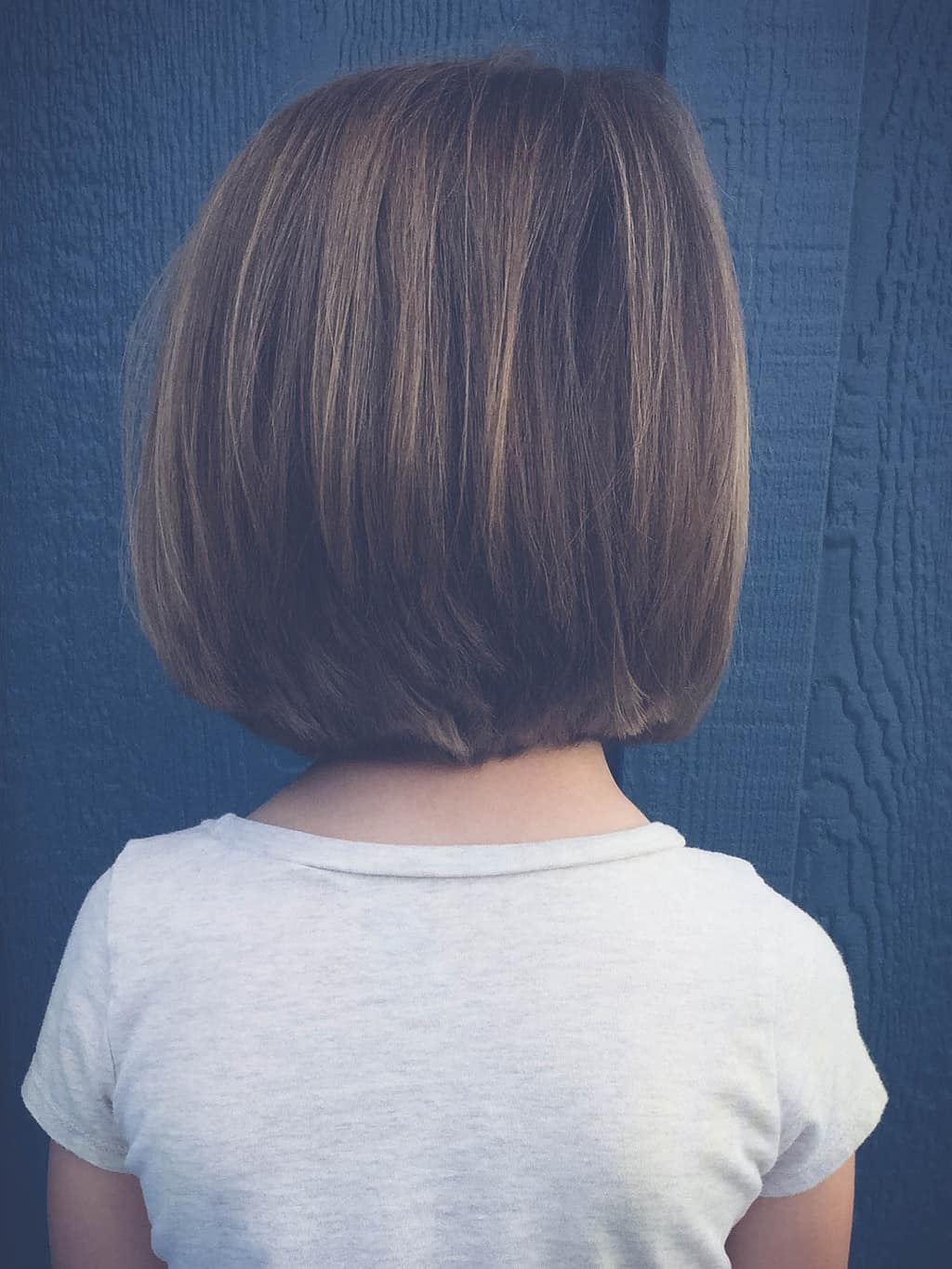 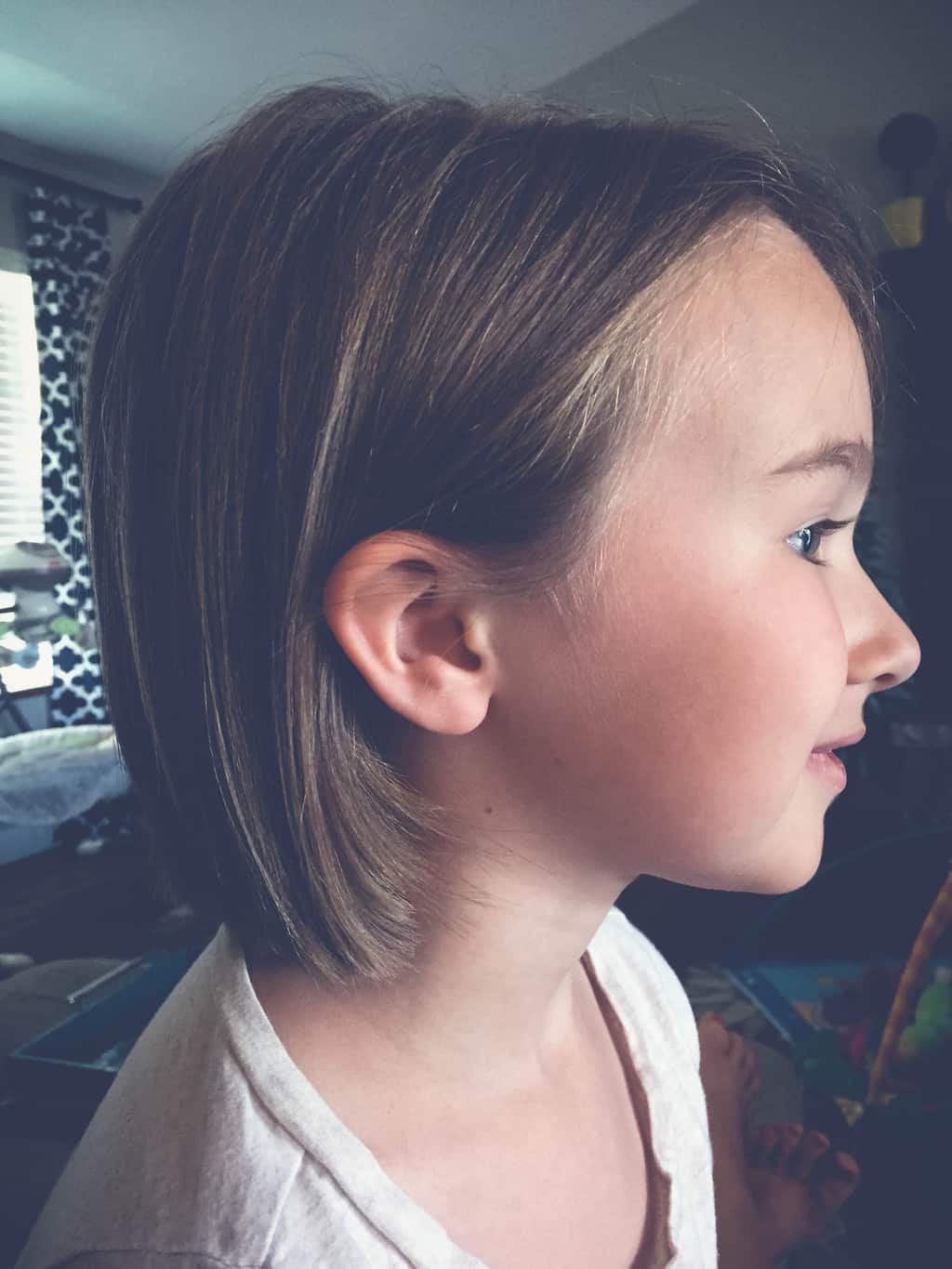 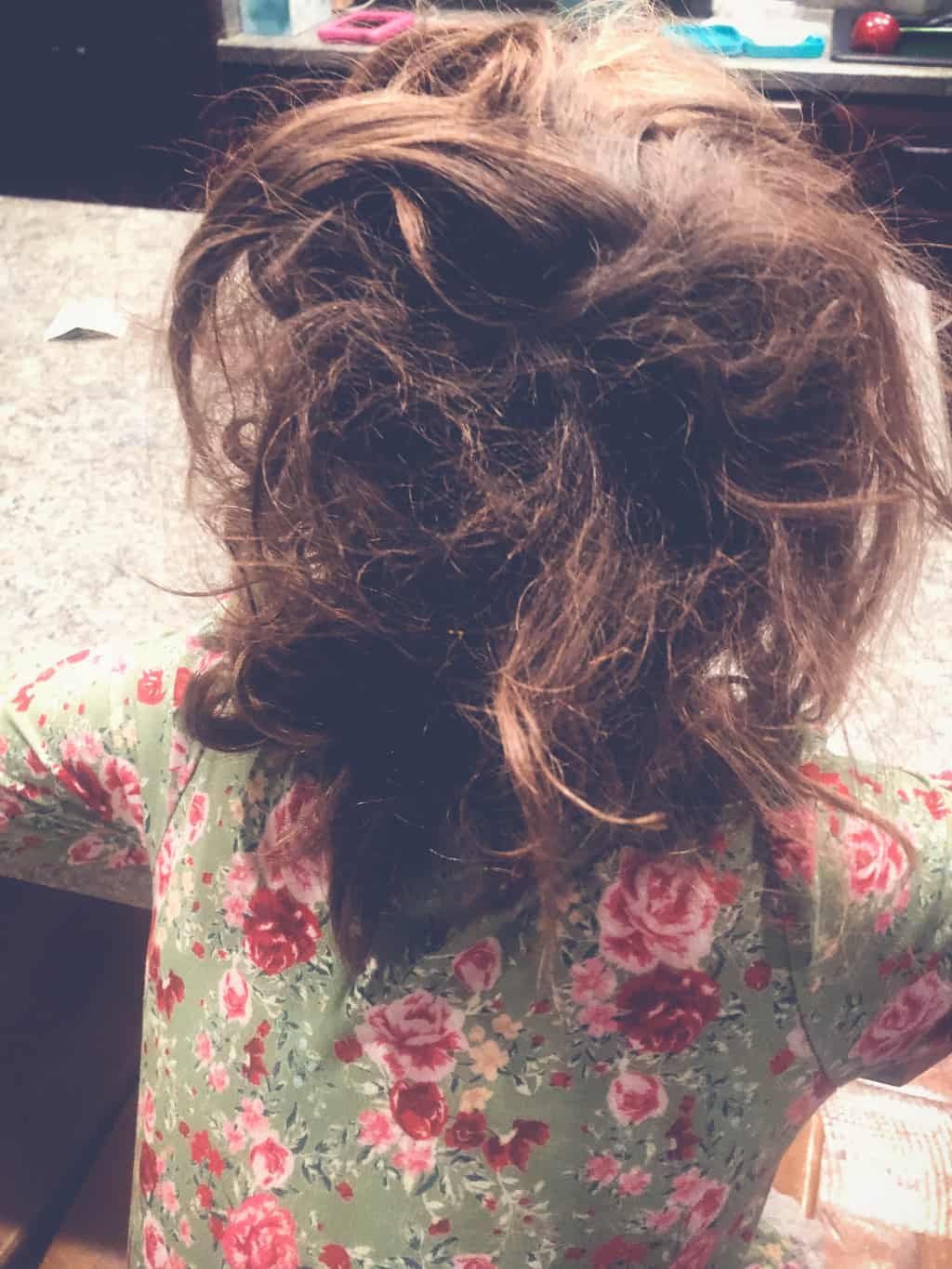 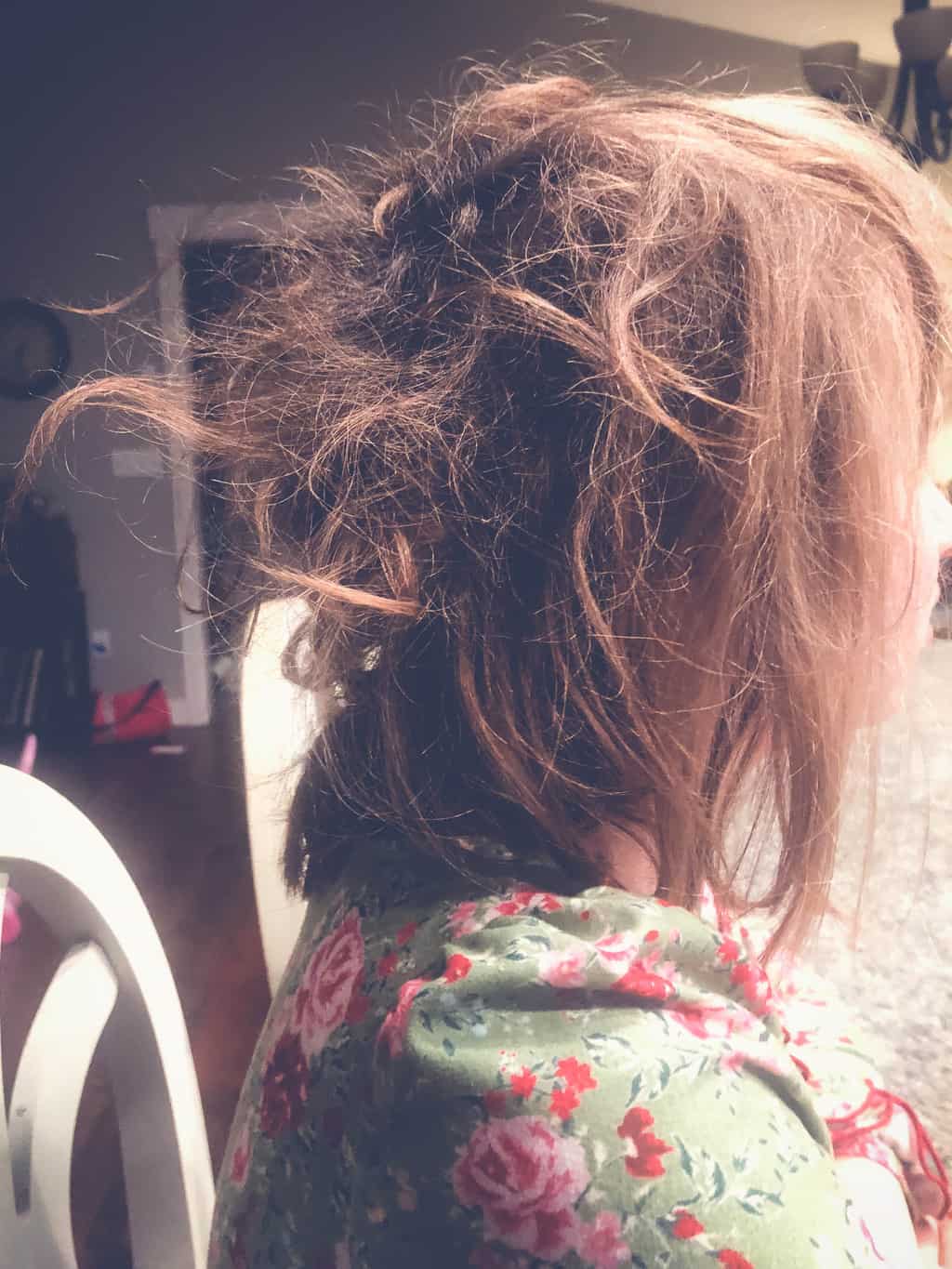 After way too many unhelpful YouTube videos and friends telling me how easy it was, I finally heard something that made sense. Of course, I have no idea where the video is now, because I wanted to share it but never found it again. But the video itself wasn’t very helpful; it was something she said.

When people are trying to tell you how to French Braid, they always say things like “Just pick up a little hair from each side and add as you go.” Or, “grab a little bit every time you change hands and fold it into the braid.” They kept saying the same things and I would look at them and say, “I understand the concept, but I can’t make my fingers do it.” I have even sat with a hairdresser and watched her technique, and by the time I got home to practice on my kids, it was gone.

What “French Braid YouTube Lady” said, that for some reason finally made it all click, was the word “SLICE.” That’s right! You are not picking up random chunks of hair all willy-nilly. Every single time, before you fold either the right or the left over the middle, You are SLICING through the hair from hairline all the way back to the center/braid, adding that entire scooped up layer of hair to the existing strands on either the right or left side depending on which side you Sliced from. If you Sliced from the right, add it to the right strands and if you slice from the left, add to the left strands. Then that section immediately folds over the middle so you can continue on the opposite side. You are literally braiding one layer into the braid at a time. You never fold a side over the middle without first adding sliced/scooped hair.

Now, re-reading the last section I’m concerned it may sound like a crazy person wrote it. But if you think at all like me, you are sitting there nodding your head with confidence, because you are about to go French Braid the heck out of some hair.

Let me go ahead and warn you, your first French Braid may not be great, because it really does take a lot of practice. And you know who doesn’t like to sit for extended periods of time while you practice…..yup, the same little people who are wanting the French Braid. But they want the perfected masterpiece, not the work in progress.

I tried more than once, feeling pretty proud of what I had accomplished, only to have my child tell me she didn’t like it as she was pulling it down. I cannot describe the white-hot anger that pulsed through me as I sat there like a peasant being reprimanded by the queen.

I bottled up the rage and simply said, “We really need to work on being more grateful, when people go out of their way to do something special for us.” Then I thanked the good Lord for the control He gives us mothers, and the grace He showers upon us when our words don’t always match our hearts.

For the sake of my sanity and the relationship with my girls, I finally broke down and bought one of those creepy mannequin heads to practice on. It was worth it. 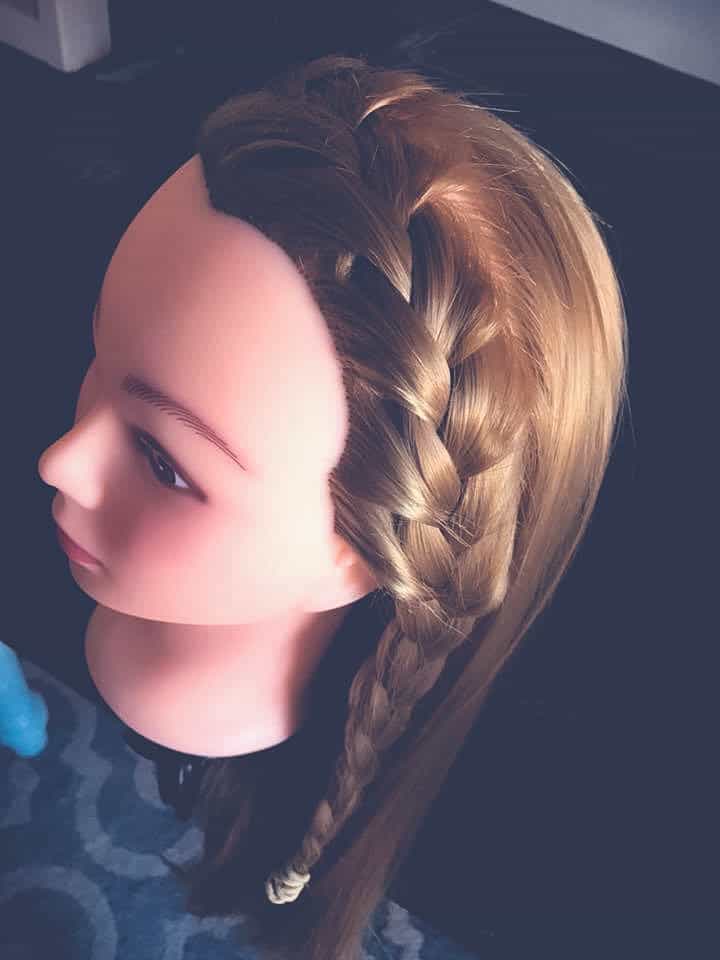 Warning: Even knowing she was there, I would still get startled, more often than I’d like to admit, whenever I would glance up and see her. I think it is partly because she was never in the same place. And then my husband started intentionally trying to scare me, by placing her in unexpected places. 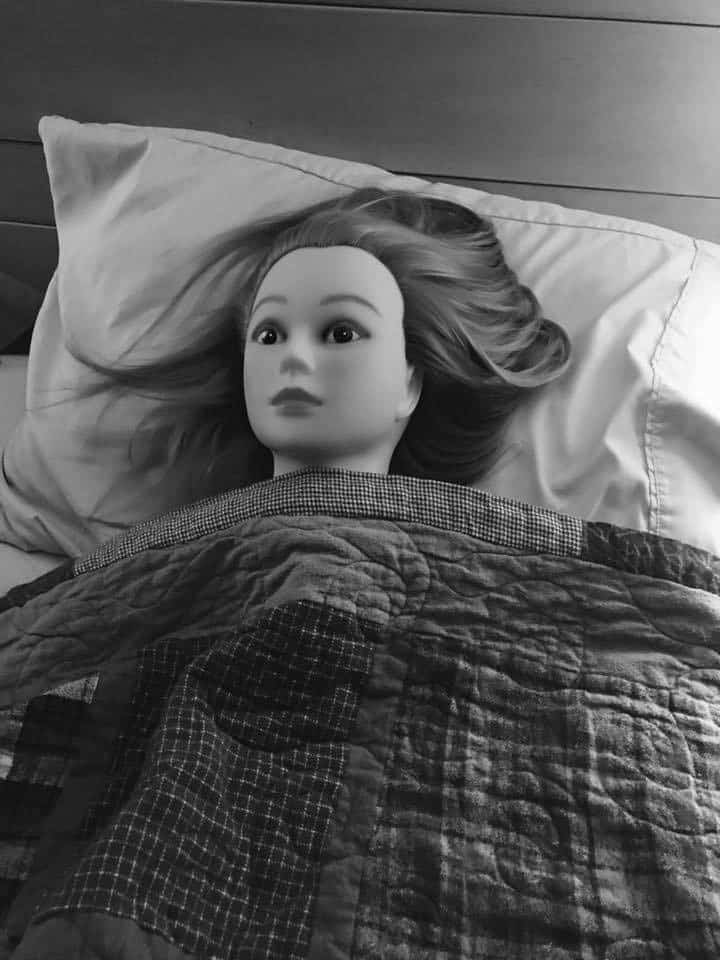 Just a few tips from someone who really has no business giving out French Braid advice: For Beginners.

1. WET THAT HAIR. Not like spritz it with a water bottle wet, I’m talking straight from the bath with a little towel dry. And then keep a towel nearby, because as you work your way down you may be squeezing out water.

2. Add a silly amount of conditioner, then don’t rinse completely. When you first start, if you hit a snag or a tangle the entire endeavor goes to pot. You want to SLICE through with ease.

3. BRUSH IT with a comb if possible. Again, tangles are death to the French braid.

4. This is one of those times, when screen time is your friend. Eventually, I’m sure people get faster, but I am still slow and an occupied child is a still child.

5. I have never had luck with detangler spray, so I mix conditioner and water in a spray bottle and use generously. 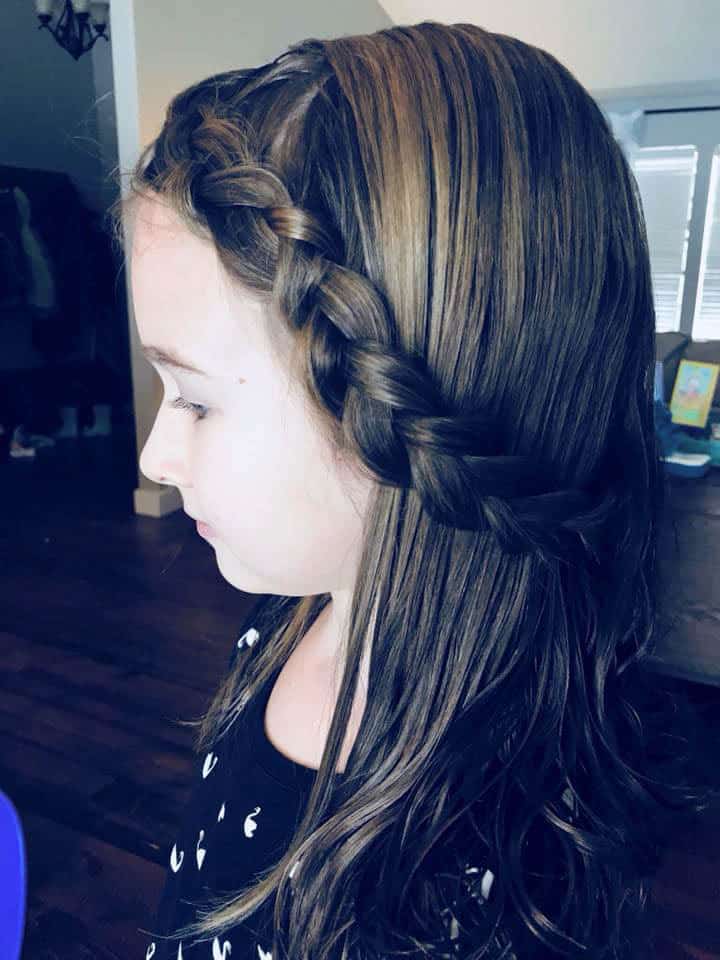